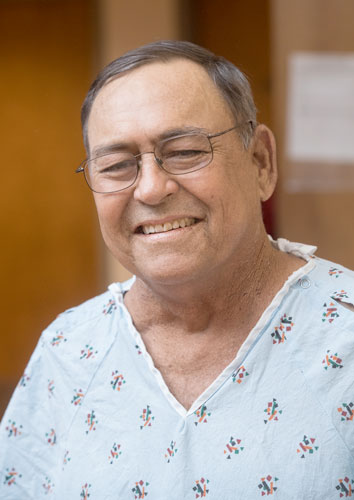 Michael Cox was UAB’s 10,000th kidney transplant recipient, receiving both a kidney and liver from a deceased donor the day before Thanksgiving.Just a couple of days before Thanksgiving, Amy Cox said her husband, Michael, asked her what is a fairly common question from a spouse this time of year — what would you like for Christmas?

Just this past Wednesday, Barbara Adams sat in UAB Hospital waiting to hear that her two sons — 31-year-old Tony and 26-year-old Daniel — were both out of surgery and doing well.

“I have felt very fortunate, blessed and terrified for both of them at the same time,” Barbara said. “I’ve always taught my children that they are all they’ve got at the end of the day. I never thought they would really have to prove that to one another, but here we are.”

Indeed, here we are.

But here at UAB Hospital, just one week apart, Michael Cox became the UAB Division of Transplantation’s 10,000th patient to receive a kidney transplant thanks to the generosity of a deceased donor; and Tony Adams became kidney transplant recipient No. 10,001, with his gift coming from a living donor — his brother, Daniel. The milestone surgeries come as the Department of Surgery in UAB’s School of Medicine nears the end of its 49th year of performing transplants.

The transplants make UAB one of only three U.S. transplant programs to cross the 10,000-kidney transplant mark. And since 1988, the first year the United Network for Organ Sharing began distributing organs nationally through the Organ Procurement and Transplantation Network, UAB has performed 7,823 kidney transplants — more than any transplant center in the nation in that timeframe.

“This whole experience has given us a new appreciation for what we have right here in Alabama with UAB,” said Amy Cox, who lives with Michael in Jacksonville, Alabama. “Our doctors and nurses throughout this process have just been amazing. I have been watching my husband go down so fast this year. After his kidneys failed, his liver did, too. And he has O-negative blood, which only 6.6 percent of the population has, which makes it even harder for someone to get a transplant. Because his kidneys and liver failed, he had to have both transplanted at the same time, and that is what happened. Here we are a week later, and it’s just incredible to see how far he’s come.”

Daniel Adams has been familiar with UAB for almost his whole life. His father, Mark, currently works at the university, and mother, Barbara, has worked here in the past, too. Like his father, Daniel also is a current UAB employee. Daniel was able to use UAB’s newly adopted paid-leave benefit for employees to donate to his brother, Tony. 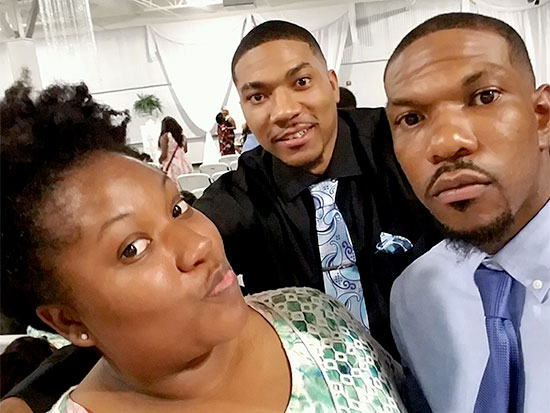 Aubrei Adams stands with her brothers, Daniel (center) and Tony (right). Daniel donated a kidney to Tony, marking the 10,001st kidney transplant to take place at UAB Hospital.“I’m fortunate because I was born here in Birmingham, and I work in Materials Management here at UAB, so I get to see firsthand how great this place really is, especially for those who are sick like my brother has been,” Daniel Adams said. “To be a part of the 10,001st transplant and know that it’s going to give my brother a chance to be healthy and hopefully live a long, healthy life? It’s a blessing that’s just impossible to capture in words.”

Arnold G. Diethelm, M.D., was recruited to UAB to start a transplant program in Alabama in 1967 from Nobel Laureate Joseph E. Murray’s laboratory and program at the Peter Bent Brigham Hospital in Boston, where the first successful kidney transplant was performed in 1954.

Surgeons performed the first four kidney transplants at UAB Hospital in 1968. The kidney program now averages almost 300 transplants per year, and its four primary kidney transplant surgeons — Mark Deierhoi, Michael Hanaway, Jayme Locke and Carlton Young — have combined to perform 3,963 transplants in their time at UAB, including more than 2,200 by Deierhoi in 31 years with the division.

UAB kidney transplant also boasts an incompatible transplant program and recently performed the Deep South’s first HIV-positive to HIV-positive kidney transplant. The program, along with the Pediatric Renal Transplantation program at Children’s of Alabama, is the only one in the Southeast to offer kidney paired donation to those younger than 18, as highlighted by 2-year-old Wryn Graydon’s transplant this past July, a living donation gift made by her 62-year-old grandmother, Carol Graydon.

The program also is the home of the UAB Kidney Chain, which began with a single, altruistic donor three years ago to grow into what is the longest chain of kidney transplants ever performed. The chain, which has been featured on ABC News’ “Nightline,” is currently at 82 transplant recipients with more scheduled for later this month and into 2018.

“The number of transplants UAB has performed in almost 50 years is certainly impressive, but — and I’ve said this many times before — these are not numbers to us. They are people,” said Devin Eckhoff, M.D., director of UAB’s Division of Transplantation. “They are people from here in Alabama and around the country whom we and other physicians before us have had the privilege of helping return to health, in some cases for the first time in years. And the reason we have that opportunity starts with the generosity of another human being through their decision to be living and deceased donors.”

“With roughly 2,400 people on the kidney transplant waiting list, Alabama has more people per capita in need of a transplant than any other state in the country,” Hanaway said. “Our drive as a division, every day, is to find a way to try to help every one of those in need. But we cannot do it without those who made a decision to register to be organ donors upon death or decided to be a living donor. As a transplant surgeon, it’s a tremendous honor to help carry on the legacy of those who made a decision to give so others can have a chance to live.”

Cox, a Miami native, spent 35 years and eight months in the U.S. Army as combat engineer and then head mechanic before he had to be medically discharged due to his kidney failure.

“My high blood pressure and diabetes just took it’s toll after so many years,” said Cox, who retired as an E8. “I was on the transplant list for five years; but here just before the transplant, I really got sick. I only had a few weeks left before they called me for the transplant, from what I understand. But then … I don’t know. God sent me a lifeline.” 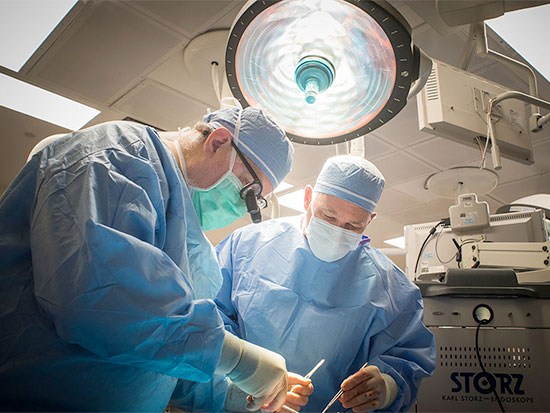 Kidney transplant surgeons Mark Deierhoi and Michael Hanaway were part of the team that completed the 10,001st kidney transplant at UAB on Nov. 29.The lifeline came from a deceased donor, who provided the liver and kidney Cox needed. The organs were transplanted by Jared White, M.D., assistant professor of surgery.

Cox says it has been somewhat tough for him to reconcile that it took someone to die so that he could have a chance to live.

“God bless the parents and loved ones of the donors,” he said through tears. “It’s kind of hard to determine how you say thank you for something like this, how you can even express thanks because of somebody else’s loss. I just hope whoever it is knows that I am forever grateful for their generosity and forever grateful that someone thought enough of others to register to be an organ donor.”

For Tony Adams, he says the process of experiencing organ failure, dialysis and relying on a living donor has been humbling in many ways. Tony says he’s grateful for his family and friends for the help they have provided him through his almost 20-year battle with nephrotic syndrome, the disorder that led to the failure of his kidneys. And his already tight bond with his brother, Daniel, is forever strengthened by his life-giving gift.

“I love my brother, and I’ve always tried to do right by him, but the fact that he would do something like this, for me, is just a blessing,” Tony Adams said. “He was so dedicated to doing it, even though he was scared. He told me, ‘Hey, even if I did not want to do it, I would do it for you.’ He’s got a lot of stuff going on in his life. He has another child due in January. But that didn’t stop him from doing this. And he’s bettered my life. He’s saved my life.”

Those interested in exploring the possibility of being a living organ donor can fill out UAB’s online Living Kidney Donor Screening Form. To become an organ donor upon death, register now at www.alabamaorgancenter.org.