Kidney Transplant Recipients Save Time, Money Thanks to Telehealth 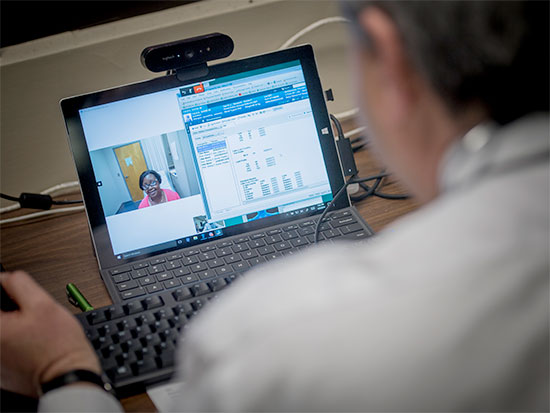 Clifton Kew, M.D., conducts an appointment from his office in Birmingham with Sheri Faulk, a kidney transplant recipient from Dothan.For more than 20 years, Sheri Faulk has had to take at least one day off of work, drive nearly 200 miles to Birmingham from Dothan and pay for a hotel room in order to spend a few hours with her transplant doctor at the University of Alabama at Birmingham — all to check in on the health of her transplanted kidney. Now, thanks to a new telehealth initiative, she only has to travel to the Pike County Health Department in Troy to see her doctor, Clifton Kew, M.D., the medical director of the Kidney and Pancreas Transplant Program, in Birmingham.

Faulk, who was diagnosed with kidney disease while she was in college in 1991, has received two kidney transplants since. The first lasted only four years. In 1997, her sister was found to be a match and donated her kidney, which continues to work today.

“I’ve had to go back and forth to Birmingham since 1991 for treatments and appointments,” Faulk said. “Knowing I don’t have to make that trip anymore, but can still see my doctor, is amazing.”

With the help of a nurse at the Pike County Health Department and videoconferencing, Faulk was able to meet with Kew “face to face.” Kew listened to her heartbeat by using a Bluetooth-enabled stethoscope, discussed her vital signs and medications with her, and checked the swelling of her legs to see if there were signs of edema by using a high-definition camera.

Faulk says the appointment took less time than in the past.

“I used to have my lab work done on the same day of the appointment around 6 a.m., meaning I would have to travel to UAB the night before,” she said. “This time, I had it a few days before in Dothan, so the nurse checked my blood pressure and temperature, then I met with the doctor right away.” 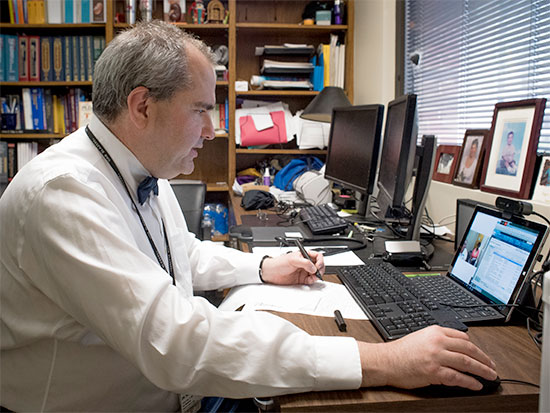 Kew conducts the appointment from his office while Faulk is at Pike County Health Department.From the time she walked into the clinic to when she left, Faulk says, took less than an hour.

She is the second post-kidney transplant patient Kew has seen for a telehealth appointment. He saw a third patient, who was also at the Pike County Health Department, shortly after. He hopes the number of remote patients continues to grow.

“Being able to see the patients via telehealth not only saves them time, but also reduces the stress of having to make plans to travel for their annual appointments,” Kew explained. “I hope this will make it easier for patients to keep their appointments so we can make sure their health is continuing to improve.”

Kidney transplant patients are not the first at UAB to benefit from telehealth. In January of 2016, Eric Wallace, M.D., a nephrologist and the medical director of Telehealth at UAB, conducted what is believed to be the first telehealth visit for a home dialysis patient in the United States. Wallace says expanding telehealth to more areas will save lives.

“There are so many patients in our state who have little to no access to subspecialty health care,” Wallace said. “The gaps in care and education that telehealth can bridge are tremendous and incredibly needed in Alabama.”

UAB received a grant from the U.S. Department of Agriculture in January to help grow its telehealth network. The nearly $500,000 grant will fund telehealth equipment at 19 locations around the state, including nine hospitals and 10 Alabama Department of Public Health county health departments.

“Telehealth saves money and time for the patients, but it also benefits the providers,” Berthiaume explained. “With an efficient telehealth system, a doctor or advanced practice provider in Birmingham can see more patients in the same window of time that he or she used to see one patient.”