Inside a high-tech heart clinic, doctors look to the past for clues to the future

When dying young runs in the family, fear is never far behind.

Will the same thing happen to me? Or my children? Is there anything I can do to lower my risk? These haunting questions drive many of the patients at UAB’s new Cardiogenomics Clinic, one of only two of its kind in the Southeast.

The clinic, launched in 2021, uses genetic testing to develop a personalized plan for patients at risk of hereditary cardiovascular conditions, including abnormally high blood pressure or cholesterol, weakness of the heart muscle (heart failure), abnormal electrical rhythms in the heart or structural problems in blood vessels. (See box, “Who should come to the Cardiogenomics Clinic?”) 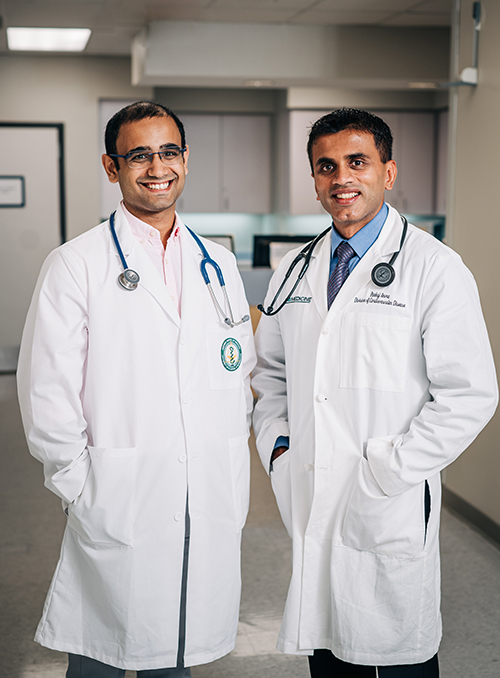 Recently, a family arrived whose teenage son had experienced a sudden cardiac arrest at home. They had been told elsewhere that the cause was hypertrophic cardiomyopathy. This is a condition in which the heart muscle grows very thick, becomes stiff and can no longer pump an adequate supply of blood. It is usually inherited, but not always.

The entire family was tested in the Cardiogenomics Clinic, and in the eventual follow-up it was found that the boy’s younger sister also had the same condition. She, like her brother, was asymptomatic. “She would never have been tested” otherwise, said clinic director Pankaj Arora, M.D., associate professor in the Division of Cardiovascular Disease in the UAB Heersink School of Medicine. However, once she was diagnosed, Arora could prescribe lifestyle changes to lower her risk of problems and offer her the first-ever FDA approved drug for her condition once she develops signs and symptoms. “That is a very satisfying and gratifying experience,” Arora said.

Genetic results can lead to treatments of another kind. One common consequence of congenital cardiovascular defects is aortopathy, or dilation of the aorta, when “the big vessel coming out of the heart is enlarged,” Arora said. “My surgical colleague Kyle Eudailey, M.D. [a cardiothoracic surgeon at UAB] and others are interested in us letting them know when this condition in a patient is genetic in etiology so they can operate before it grows too large and leads to fatal outcomes.”

Arora and his colleagues in the Cardiogenomics Clinic have already seen patients referred from across the Southeast. (The only other similar clinic in the region is at Duke University in North Carolina.) “We have had several referrals from families with a history of sudden cardiac arrest,” said Vibhu Parcha, M.D., a clinical research fellow in the Division of Cardiovascular Disease. “These individuals had a family member die in their 30s or 40s with heart disease, and realize that they may be predisposed to a similar risk.”

“When I am seeing patients in the Cardiac Care Unit at UAB Hospital, I might hear a patient say, ‘my brother had a weak heart,’” Arora said. “If there is also a history of smoking, high blood pressure and other typical indicators, there may not be a connection. But if I hear a family history that is not in a traditional paradigm, we will refer them directly to the Cardiogenomics Clinic for evaluation.” 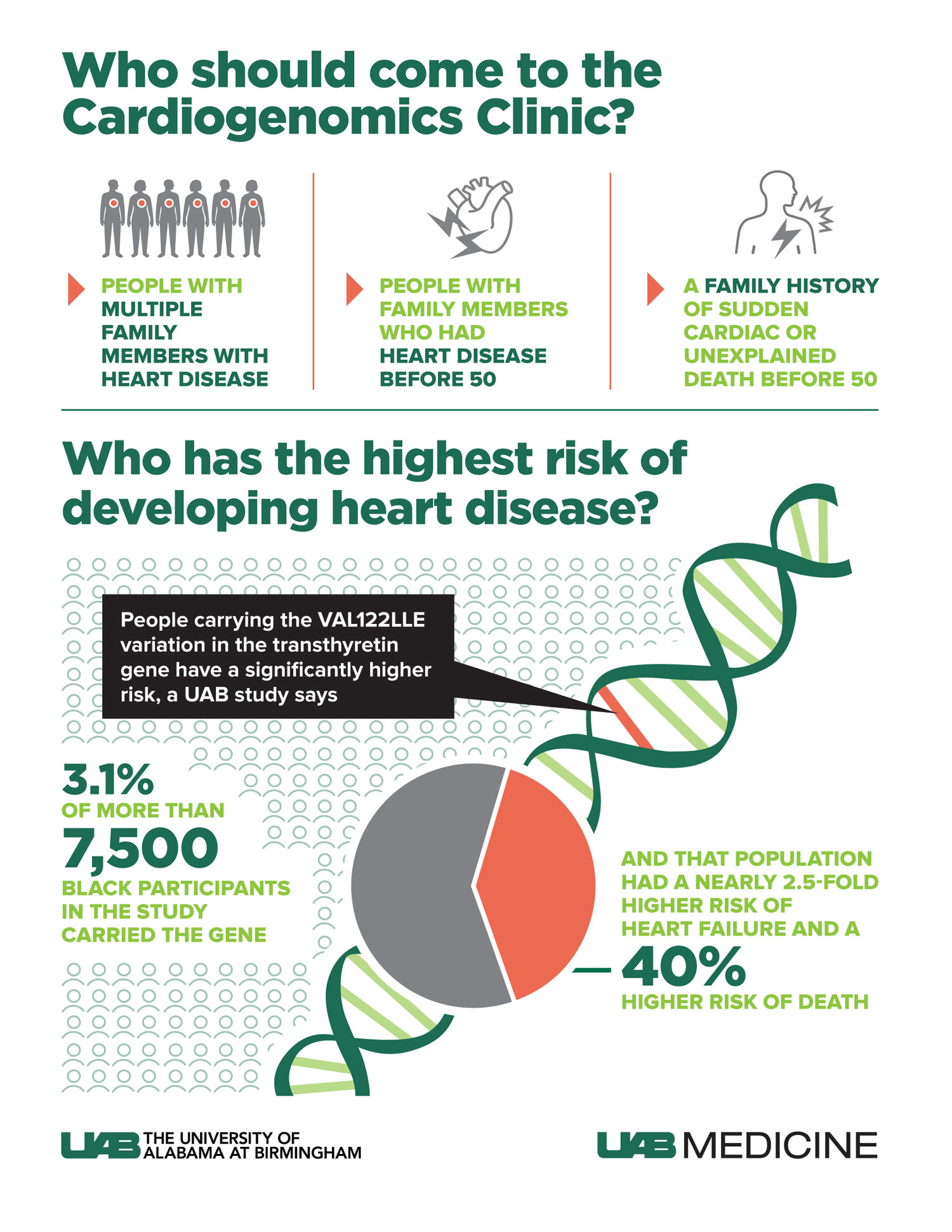 In many cases, patients receive whole genome sequencing to seek out critical spelling mistakes inside their DNA code. The human genome is made up of some 3 billion DNA bases. Most of the time, this sequence is identical from one person to the next. But every 10,000 letters or so, there will be a change, known as a single nucleotide polymorphism, or SNP, which is pronounced “snip.” The clinic uses special tests, known as gene panels, to look for specific genetic variations (formerly referred to as “genetic mutations”). “There is a gene panel for heart failure and arrhythmias, for early heart attack, and for diseases of the blood vessels,” Arora said, listing some of the options. And in every case, doctors will pore over what Arora calls “the poor man’s genetic test — the family history.”

“If you hear about a 40-year-old having a heart attack, that is unusual,” Arora said. “You are not supposed to have a heart attack at age 40. Now, we can examine that at the genetic level.”

Research by the team behind the Cardiogenomics Clinic has demonstrated that certain genetic variations, and corresponding risk of heart disease, are higher in some populations. In a paper published this spring in the Journal of the American Medical Association, Parcha, Arora and co-authors reported that people carrying the Val122lle variation in the transthyretin gene were at significantly higher risk of heart failure and death. Notably, this Val122lle genetic variant is more common among those of African ancestry — 3.1% of more than 7,500 Black participants in the UAB study carried the gene. Those carrying this genetic variation had a nearly 2.5-fold higher risk of heart failure and a 40% higher risk of death from any cause than non-carriers.

What does it cost?

Cutting-edge medicine is exciting, but it is often very expensive as well. Surprisingly, that is not the case here. “Nearly all cardiovascular genetic testing is covered by insurance,” Arora noted. Furthermore, genetic testing is free for most patients. “Genetic testing can be offered free of cost to patients in the Cardiogenomics Clinic if they agree to allow a deidentified sample to be stored for research purposes,” Arora said. “Once we explain to patients how the deidentifying process works, I would say that 95 percent of patients have chosen that option.”

Genetic testing is just the starting point. What patients and families really want to understand is what to do next. “They ask, ‘What does this mean for my cardiology care?’ Do I need to change medicines? What can I do to change my risk? What is the plan?’” Parcha said. “We can answer those questions, and in the past year [since the Cardiogenomics Clinic opened], we have not seen a patient leave who is not satisfied with the result. It has been gratifying and humbling.”

The clinic has two clinical genetic counselors on staff who specialize in translating the complex vocabulary of genetic testing and disease into a language everyone can understand. “When we see a patient, we are not taking on a single patient but their entire family,” said Taylor McClinchey, one of the clinic’s clinical genetic counselors. “The clinic provides team-based care for patients and their families, so they understand what to do if they have a genetic variation, and how it impacts them, their children, and their significant others.”

“We are going back to the roots of medicine, almost like making a house call,” Parcha said. “Patients say, ‘We didn’t know this existed. Our family has been jumping around between cardiologists and genetic clinics and getting fragments of answers. But no one has explained it to us like this. We now have a true sense of what is happening, and we love the care our family gets.’”

Arora and Parcha also lead the UAB Cardiovascular Clinical and Translational Research Program, which has created a biobanking effort known as UAB CARBON (for Cardiovascular Research Biobank) that is building a database of deidentified samples in order to allow researchers to uncover new connections between genetic variations and heart conditions. Advancing research and bettering the lives of patients and their families is central to the work being done in the UAB Cardiogenomics Clinic.

Arora has been working toward opening the Cardiogenomics Clinic for several years. He first glimpsed the possibilities of genetic testing in cardiology in the early 2000s, when he trained in population genomics at the Massachusetts Institute of Technology’s famous Broad Institute. “Those were the early days of genome-wide association studies, where we realized that we could scan through the genomes of individuals in an unbiased fashion to look at genetic variations contributing to a disease,” Arora said. “You could see the potential then. We are excited to have this going and bring clinical cardiovascular genomics to fruition.”